It’s been nine years since the niche brand Apple released the iPhone for public use. The launch of the first Smartphone changed the way people used mobile phones. However, soon after the advent of Google’s Android operating system (OS), more and more mobile apps were developed that offered features that weren’t available in the iOS apps. 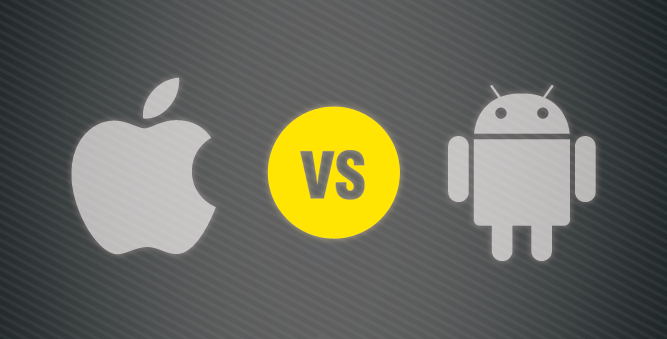 Even after years, there’s a war of words brewing between Android and iOS admirers over choosing the best OS. In this article, we’ll be looking at what
started the war between the two giants (i.e. Apple and Android). Also, we will look at the current market position of both the operating systems.

How the war between Apple and Android started?

At the time when Apple’s iPhone was introduced, many people complained about the restrictions that was imposed by Apple on using the device. The biggest problem that people encountered was inability to copy songs without having the iTunes store downloaded on their iOS-enabled device.

Also, iPhone users were not allowed to connect to any other Bluetooth devices except for the ones built by Apple. And most important of all, users couldn’t make changes and modify the system to enhance their experience. What’s more? Finding credible iPhone app developers for hire proved a challenging task for users.

Because of all of the aforementioned downsides, Google thought of developing an open source operating system such as Android. The launch of Android OS changed the mobile ecosystem. An increasing number of users started investing in making apps for the Android devices due to the friendly environment that the Google Play Store offered to users.

The war to provide better services and experience to users resulted in eliminating other mobile brands such as Blackberry and Nokia from the market, due their failure to cope up with the continually changing trends. Even though, Microsoft Windows Mobile entered the mobile landscape, but wasn’t able to create a dominant position like the Apple’s iOS and Google’s Android phones.

While some say that Android has won the war by holding the maximum share in the Smartphone market compared to Apple, many iPhone providers think otherwise.
After analyzing the reports, it’s true that Android dominates the Smartphone market with 51.4 percent share, and Apple ranked second with 44.2 percent share. In addition, Android imposes less restrictions on publishing an app. On the other hand, an iOS app may take time to get published, since it undergoes rigorous testing before getting published.

Even today, Windows and other operating systems are not seeing much growth compared to Apple and Android operating systems. However, deciding which one of two OS giant wins is difficult, as both of them are good on their part.

It’s been a decade since the war between the two mobile giants Apple and Android began. But, still you can find people debating over choosing the best mobile platform. And, there isn’t a clear winner. Which one platform you choose depends on your own personal preferences.